Diabetes is one of the most common metabolic diseases all over the world. International Diabetes Federation (IDF) estimated that prevalence of diabetes continues to rise reaching 642 million by 2040 (1). In type 2 diabetes, the body builds up resistance to insulin and more insulin is needed to bring down blood glucose levels. As a result the pancreas needs to produce more insulin than it would normally need to. If the pancreas can no longer produce enough insulin to bring down sugar levels, the symptoms of diabetes will begin to appear. Type 2 diabetes comes on gradually and it can take up to years for symptoms to appear. Further development of type 2 diabetes can lead to loss of insulin producing beta cells from the pancreas (2).

The principal features of type 2 diabetes are an abnormal sensitivity of peripheral tissues to insulin and decreased levels of hormone secretion. In pancreatic β cells, glucose oxidation and lipid peroxidation always lead to reactive oxygen species production, and which are normally detoxified by catalase and superoxide dismutase. However, β cells are composed of small amount of these proteins and glutathione peroxidase (antioxidant enzyme). Excess of glucose and lipid lead to formation of large amount of reactive oxygen species in β cells, followed by damage to cellular components. Additionally, reactive oxygen species are known to enhance NF-KB activity, which potentially induces β cell apoptosis (3).

Purple rice (Oryza sativa L. indica) is cultivated in Southeast Asia, including Thailand, China and Indonesia. Major functional component of pigmented rice is anthocyanins. Anthocyanins have been proved to have antioxidant, anti-inflammatory, anti-diabetes and anti-hypercholesterolemia. Our previous study also showed that anthocyanin-rich bran from Thai purple rice genotype Kum Doi Saket ameliorated hyperglycemia and hyperlipidemia in high-fat diet plus STZ induced type 2 diabetic rats. We revealed that supplementation of purple rice extract not only attenuated hyperglycemia, but also prevented the rise in pancreatic lipid peroxidation and enhanced the pancreatic antioxidant defense capacity (6). However, the molecular mechanism has not been investigated. Nowadays, proteomics study becomes the interesting research scope for analyzing different protein expressions in different diseases. It is used to explore molecular pathways and find biomarkers. Therefore, the present study, the proteomic technique was performed to investigate whether the antidiabetic effect of anthocyanins-rich bran from Thai purple rice was associated with the improvement of pancreatic structure and function in type 2 diabetic.

Pancreas tissues were pulverized in liquid nitrogen using mortar and pestle. Then fine powder was dissolved in 1 ml of 0.5% SDS. The mixture was centrifuged at 10,000 g for 15 minutes. The supernatant was collected and mixed with 2 volumes of cold acetone, and then placed at -20ËC overnight. The following day, the mixture was centrifuged at 10,000 g, 15 min and got the protein pellet. Finally, the protein pellet was resuspended with 0.5% SDS and stored at -20ËC. Protein concentration in each tissue samples was determined by Lowry assay using bovine serum albumin (BSA) as standard. The proteins from each sample was adjusted to an equal protein concentration and pooled together according to groups for further SDS-PAGE analysis.

In SDS-PAGE, proteins were separated based on polypeptide length, and so their molecular weight. After proteins are separated by SDS-PAGE, then the gels were stained with silver staining.

The in-gel digestion is part of the sample preparation for the mass spectrometric identification of proteins. The excised gel pieces was in gel digested using an in-house protocol developed in National Center for Genetic Engineering and Biotechnology (BIOTEC), Bangkok, Thailand (7).

The analyzed MS/MS data from DeCyder MS were submitted to database search using the Mascot software version 2.2 (Matrix Science, UK) (10). The data were searched against the NCBI database for protein identification.

The information (such as molecular weight, molecular function, structure, sequence) of interested proteins from Mascot search was searched against Uniprot database (http://www.uniprot.org/). Search tool for the retrieval of interacting genes/proteins (STRING version 10) were used to propose possible mechanism(s) of diabetes and anti-diabetes effects of purple rice bran.

To propose the molecular mechanism(s) of antidiabetic activities of purple rice bran, phosphorylated p-Akt Ser473, Glut 2, and Glut 4 protein expression in pancreatic tissue were measured. Image J software was used to detect the band density. Protein concentration was compared with the normal group, setting as arbitrarily 100.

The experimental data were shown as mean ± SE or mean ± SD as appropriate. Statistical analysis was done by analysis of variance (ANOVA) and followed by post hoc LSD test to determine specific mean difference. A significant difference was set at p <0.05.

To get more information regarding the molecular mechanism of diabetes, we constructed the protein interaction network between the unique proteins of the DM2C group and other proteins by using the STRING (ver.10) software. The result was as shown in Figure 2, six additional interacting proteins (Becn1, Pik3r4, Gss, Gpx1, Gstk1 and SOD3) were put in the network construction to get more perfect pathway. Interestingly, 4 out of 14 unique proteins (Nae1, Atg14, Ptgr1 and Map1l3cb) (Table 1) were found to be associated with proteins related with oxidative stress response proteins (Gss, Gpx1, Gstk1 and SOD3) and proteins related with autophagy pathway (Becn1, and Pik3r4). This will support the involvement of pancreatic β cell death in the development of diabetes.

The protein interaction network of unique protein in DM2R rats’ pancreas was studied by using the STRING (ver.10) database. As shown in Figure 3, five unique proteins (Rasgrp3, Clca 1, Olr3, Abcc4, Mfn1) (Table 2) were found to be connected with other proteins functioning in glycolysis (Pklm, Pgam2, Pkm, Eno3) and insulin signaling (such as Irs1, Foxo1, Foxo3, Irs 2). Interestingly, myosin I heavy chain (Myo 1c) (gi400429) is a protein that function in Glut 4 translocation and it was upregulated in both NDR and DM2R rats’ pancreatic protein of this study. Furthermore, Myo 1 c showed a correlation with unique DM2R protein in STRING network. Based on this information, purple rice bran supplement might involve in insulin signaling and glucose metabolism. 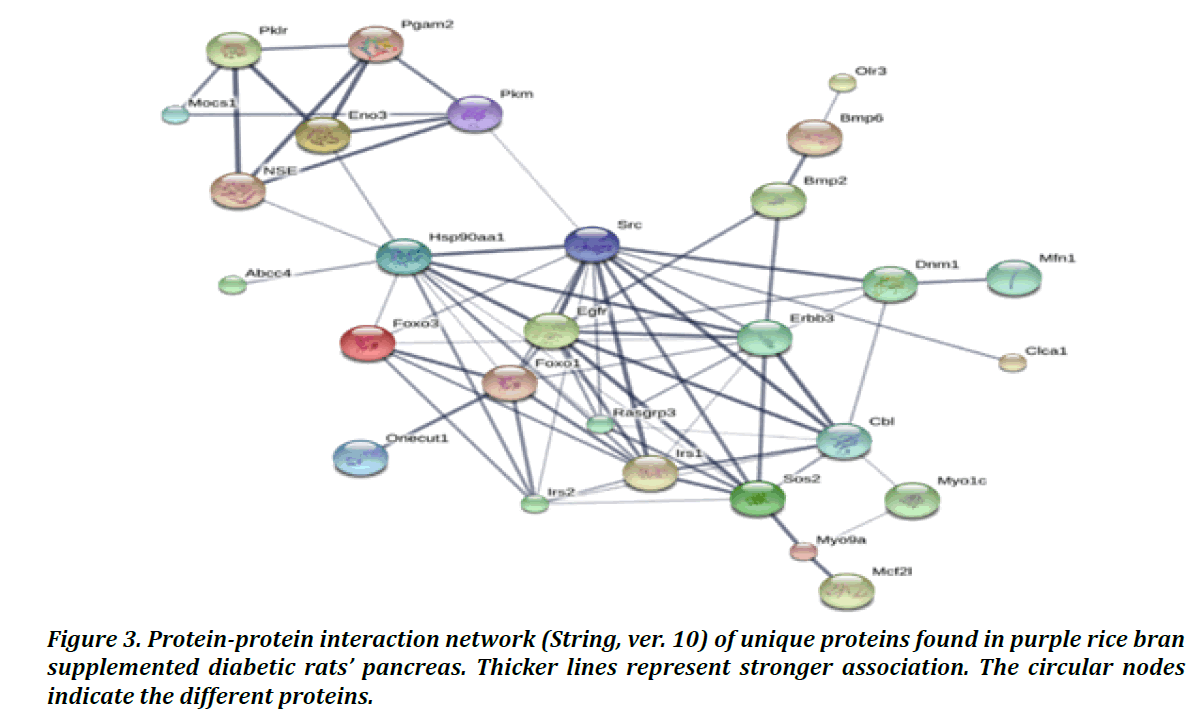 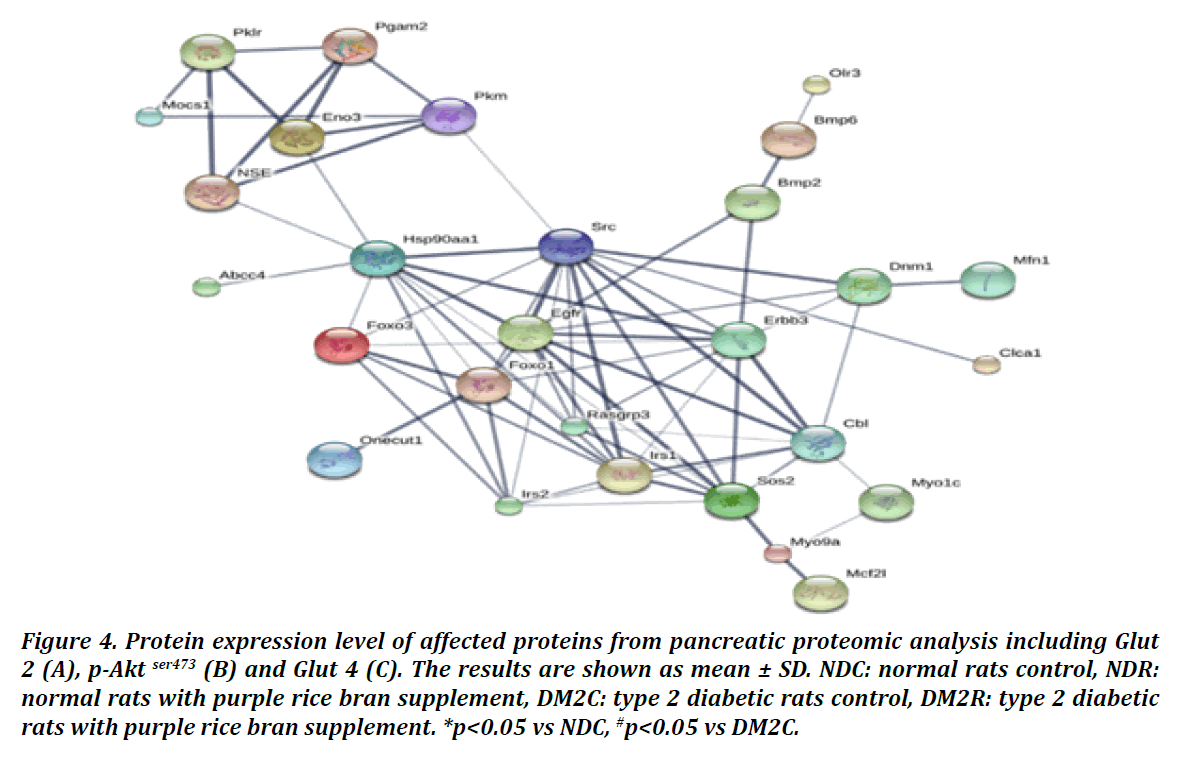 Type 2 diabetes is characterized by insulin resistance in peripheral tissue and impaired insulin secretion from pancreatic-β-cells dysfunction and/or the reduction of β cells mass. (11).

Pancreatic β cells loss in type 2 diabetes results from apoptosis, oxidative stress and endoplasmic reticulum stress. Based on those studies, β cell loss has been reported to be a participant in the onset of diabetes. In this study, guanyl nucleotide-releasing protein for Ras 3 (Rasgrp 3) found in type 2 diabetic rats supplement with purple rice bran. Rasgrp 3 is a member of the RasGRP family that activated MAP kinase kinase kinase phosphorylation (Raf) (12). It has previously reported that Raf 1 is required for β-cell survival and proliferation (13). From this finding, it can be summarized that purple rice bran can affect to Rasgrp3 expression to increase pancreatic β-cell proliferation and β-cell survival. According STITCH 4.0, we found interaction of Rasgrp3 with Myo 1c that associated with Glut 4 translocation.

Myo 1 c, myosin I heavy chain, is an actin-based motor protein. It facilitates insulin-stimulated Glut 4 translocation in adipocyte and skeletal muscle. Previously, in 3T3-L1 adipocytes, the high expression Myo1c promoted the insulin stimulated Glut 4 transport in adipocytes (14). Moreover, there was enhanced glucose uptake in skeletal muscles expressing wild-type Myo1c and impaired glucose uptake in skeletal muscles expressing mutant Myo1c. And they proposed that Myo1c increase glucose uptake by transporting Glut 4 to cellular membrane (15). However, Glut 4 is not a major glucose transporter in pancreas and Myo1 c expression in pancreas had not been reported. Interestingly, we found that Myo1c expressed in pancreatic tissue of purple rice bran supplemented diabetic group.

This study supported by Faculty of Medicine, Chiang Mai University. We wish to thank Dr. Sittiruk Roytrakul at National Center for Genetic Engineering and Biotechnology (BIOTEC) and National Research University Project under Thailand’s office of the Higher Education Commission.

The authors have no conflict of interest.